Volunteers from the Northshore SES unit went sky-high (literally) last weekend in order to make safe a large roof on a disused industrial building. With the help of the Perth CLP, FRS and SES crews worked together to make the situation safe and secure the roof until a long term solution could be arranged by the owners. 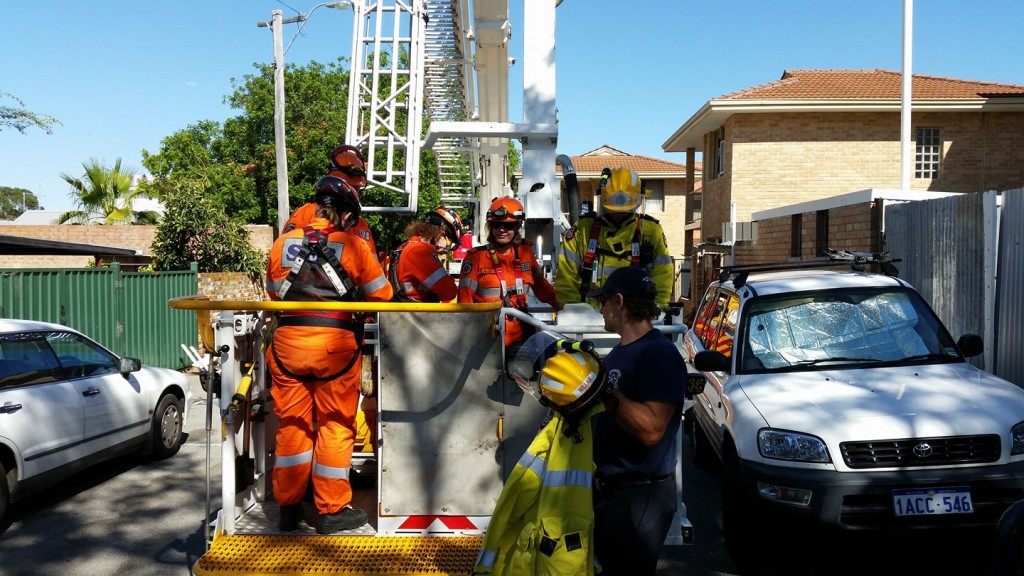 Perth FRS was first called to the building after a localised wind-cell (willy-willy) passed through, causing damage to the roof. Numerous roof sheets were ripped off the building completely, whilst others were left dangling precariously. FRS crews (who were first on scene) used the CLP to remove the sheets that were hanging dangerously off the building. An SES crew then went up in the CLP to assess the situation, and later returned to remove and/or fasten down the remaining loose sheets.

SES Team Leader Andre Copland said it was great to have worked so closely with the Perth FRS crew. “This is the 4th or 5th time that Northshore SES has worked with the CLP crews over recent years. To have these assets at our disposal is a really good thing, and in this instance made our response safer and faster.”

Deputy Local Manager Hazel Darkin said “The CLP enabled the team to quickly and safely access the roof and conduct the repairs. The CLP crew were respectful and accommodating, and their skill enabled the SES crews to get into exactly the right position to complete the tasks in a number of different parts of the roof”.

Nearby cars and properties were reported to have been damaged by airborne roof sheeting.