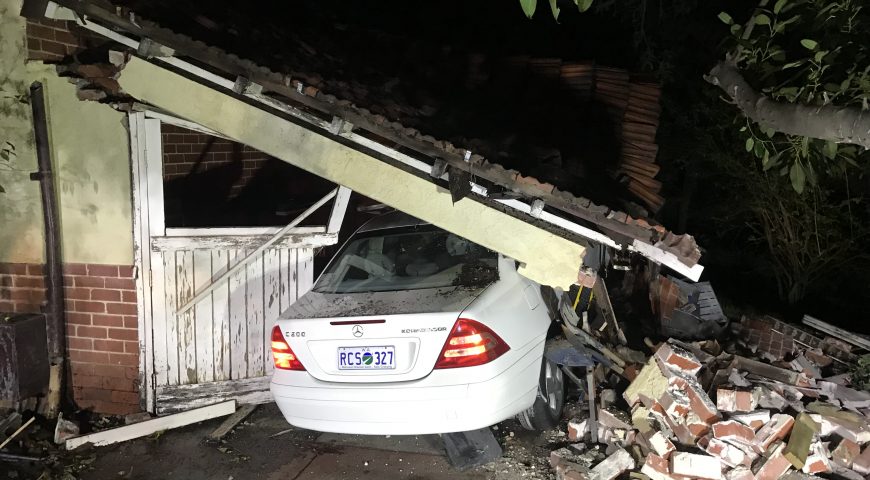 An out of control Mercedes caused mayhem in Cottesloe last night, after it careered into the car port of a house on Griver Street.

The 80 year old man driving the car, was lucky to walk away unscathed after his vehicle crashed into the structure, demolishing the front wall and pillar causing the roof to collapse onto the car.

Crews from the Northshore SES unit worked closely with Fire & Rescue colleagues from Claremont to agree the best way of dealing with the scene.

Local Manager Northshore SES Nick Elliott said that on first arrival, it was clear that the the number one priority would be making the scene safe before any recovery operation could commence. “The roof structure had (on one side) fallen onto the car below, but the other side, as well as the rear section, was precariosuly hanging off the adjacent building, so it was critical that this roof structure was stabilised before anything else was touched”.

Nick and SES Team Leader Carlo Restifo worked up a plan to pull the structure to safety, and after agreeing the finer details with the Fire & Rescue crews, the roof structure was brought to the ground, enabling the SES crews to dismantle it piece by piece so as  to enable the car to be safely removed.

The elderly gentleman was visiting his granddaughters home for his weekly family catch up. The family say as he parked on the front driveway, his foot got caught on the accelerator which caused the white Mercedes to slam into the home around 6pm.

He was able to climb across to the passenger side to free himself. A man walking his dog heard the crash and rang police.

SES and FRS crews were on site for approximately 3 hours making the are safe and clearing the rubble.

The driver is recovering with his family and says he’s very thankful for everyone that helped. The eldery gentleman was treated for shock at the scene but was not injured.